Join Colorado Right to Life at the State Capitol for the March for Life on Saturday January 19th at 1:30 p.m. to hear Julie Makimaa:

"Aborting children conceived in rape or incest is society's way of punishing an innocent victim for the crimes of another," says Julie Makimaa, who powerfully drives that point in appearances before live audiences (like at our March!), as she has done on many shows including Donahue, Geraldo, and Sally Jesse Raphael. 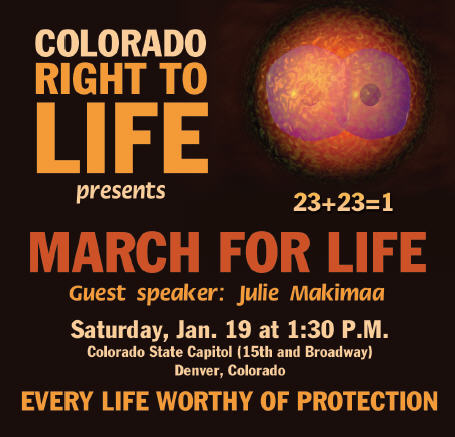 "Many people believe abortion is morally justifiable," says Mrs. Makimaa, "and medically necessary for women pregnant through rape and incest. I encourage everyone who holds this position or who has doubts about the best solution for women in these situations, to attend the CRTL March for Life on January 19 th at the Capitol." You will gain a new understanding of the value of every life and the benefits for women who choose life!

Julie recently left a full-time position with Habitat for Humanity to care for her three year old grandson. Before joining Habitat, Julie was the Director of the Michigan Prayer Network and the Life Issues Advocate for Family Research Council. Together with Dave Reardon, President of the Elliot Institute, and well-known post-abortion researcher, Julie has compiled, Victims and Victors: Speaking Out About Their Pregnancies, Abortions, and Children Resulting from Sexual Assault .

Julie has testified before a number of state legislatures, lobbied Congress and appeared on numerous radio and television talk shows, including Donahue, Geraldo and Sally Jesse Raphael. Many national newspapers and magazines have covered her story including the Los Angeles Times and Washington Times and Glamour.

Julie and her husband Bob live in Michigan with their daughter and grandson, and their son Herb serves in the United States Air Force, based in Germany. And with the president and officers of CRTL, Julie hopes you will come to the March for Life on Jan. 19th at 1:30 p.m. at the Capitol to encourage the troops in the battle against the killing of the innocent right here in America!