Xiu's story: Xiu Mei Wei (Shoe Way May) was engaged to a man in China. The engagement ceremony is a solemn event and taken very seriously. Xiu's fiancé moved to the U.S. in the nineties and arranged their marriage ceremony. Her beloved fiancé picked her up at the airport, told her that he was no longer interested in marriage and abandoned her. 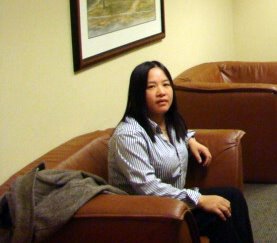 When a woman has been betrothed in Xiu's culture, and the man then abandons her before the wedding, she is shunned by her family and her village.

Imagine being in this country knowing no one and speaking only Mandarin. Add to that the feelings of shame, abandonment and the knowledge that you have very little money, now you are just beginning to understand the terror that Xiu was experiencing the day she arrived in the United States. That terror pales in comparison to what Xiu is facing today.

Xiu's dilemma: Over the decade since she came to the U. S. Xiu met a wonderful Chinese man, married, settled in Oklahoma and now has four children. Since 2002 Xiu has been petitioning our courts for asylum. Although Xiu has been living in the United States, China still recognizes her as a citizen and she is held accountable to their laws, including their one child per family laws. Family planning officials in China have stated to Xiu's parents that if she returns to China she will be sterilized and fined. Then only after exorbitant fines are paid would her children be able to receive health care, attend school or be employed.

November 7, 2008 the 10th Circuit court in Denver ruled that because Xiu's former lawyer mistakenly filed her case in the 5th Circuit Court she missed filing deadlines in the 10th Circuit and therefore must return to China.

December 2nd with the permission of Xiu's New York attorney John Chang, the help of Colorado Right to Life and her interpreter, Hon Suen, Xiu spoke out for the first time. Desperate not to be separated from her children, she risked even further persecution from the Chinese government as she openly criticized China's forced abortion and sterilization policies during her interviews with Denise Blomberg and Roy Hanschke on KPOF am, Jay Marvin at 760 am, again on KLTT am with Bob Enyart and finally Bob Unruh, a journalist with World Net Daily, interviewed her and ran the story mentioned earlier.

A petition for rehearing has been filed in the 10th Circuit Court. If the hearing is denied or if asylum is refused, Xiu is subject to immediate deportation.

What you can do:

1. Please send a letter (you could use or modify the following example) to:

To Whom It May Concern,

Regarding Case # 079537 and Xiu Mei Wei, please do not rule to deport Xiu to brutal China. Please realize that human rights take precedence over technicalities. America cannot save everyone in China, but Xiu is already here. If we deport her, as Xiu says, "I am in an impossible situation. If they deport me to China, I have to take my children, because I am their mother and must care for them. But I cannot take them to China, because they will lose their freedom, and endure forced abortion of my grandchildren. This is an impossible situation." No technicality justifies you denying Xiu political asylum and thereby sentencing her to a loss of freedom, a loss of religious freedom, and a loss of freedom of speech for her and her children; and you would thereby be sentencing Xiu to forced sterilization and fines because while in America she has violated China's anti-choice one-child policy and now has four lovely children, which boys would be shunned by China's government as illicit children; and finally, Xiu would likely be punished and probably jailed due to speaking publicly to expose China's systematic denial of freedom to its people. Please have mercy on Xiu Mei Wei.