Election Results: Politically, Colorado’s personhood Amendment 48 was trounced, but still it received over 600,000 ‘Yes’ votes, providing a firm baseline from which we will continue the fight to uphold the God-given right to life of unborn children. With two down and one to go: slavery abolished and the holocaust ended, Christians will continue their 41-year fight in our state since 1967 to end the ‘legalized’ killing of unborn children. Defeating widespread injustice is never easy. Colorado RTL will press on and work to export the personhood strategy to other states and nations, to advocate enforcement of God’s enduring command, Do not murder.

Amendment 48 was Opposed by Planned Parenthood: But see the cruelty of their founder who they still honor who described people with eternal value, “the blind, deaf and mute… the feeble-minded and epileptic” as the “dead weight of human waste,” as Margaret Sanger wrote in Pivot of Civilization page 51 and readable online at books.google.com. 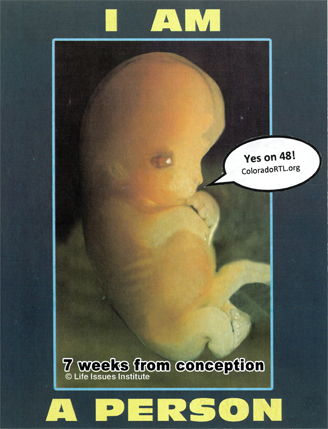 The Amendment 48 Archive:
– The Amendment 48 Ballot Text
– Our Amendment 48 C-SPAN debate
– Faithful are the Wounds of a Friend
– Please, Gazette, Don’t Take Our Side
– WND: Pro-lifers rip off “Horton”? So Sue Us
– Ten State Legislators Endorse A48